There is a feast day coming up soon that I wanted to write about now before the school year officially starts.  For us it ought to be a very important day but every year it passes without fanfare or much notice at all.  It is the feast of the patron of our diocese:  Saint Cloud.

On the seventh of September the Church will celebrate the Memorial of Saint Cloud – in its original French, the name is Clodoald, with the nickname Cló.

The grandson of Clovis, Clodoald’s young life was tragic with many of his own family members (and others) resorting to murder to control the eventually kingdom of what we now call France.  He renounced his claim to the throne of France and became a monk – even ceremoniously cutting his long hair (for monks, this is a formal ritual called a tonsure) but served the double-purpose of making is clear that he does not claim himself for a royal station (at the time, male royalty would have long hair).

After some time, he was ordained a priest by the bishop of Paris.  He was known to be a strong servant of the Holy Faith and eschewed honors, praise, and privilege.  After his death the area of his parish near Paris was renamed Saint Cloud; eventually this would be the location of a vacation home for the French royal family.  Most famously, the dictator Napoleon wrote from his Russian battle front to his ministers back in France asking how things were back home.  They wrote back to Napoleon about the economy and security of Paris and France as a whole.  The response from Napoleon was a frustrated question:  “fine, but how are things in Saint Cloud,” meaning “how is my wife?”

Interestingly, this is how the city in Central Minnesota took the name Saint Cloud.  A rich landowner in the was trying to establish good relations with French fur traders coming South from Canada.  Knowing this tidbit about French history, the landowner would greet the fur traders with “how are things in Saint Cloud?”  After a good chuckle, the fur traders starting referring to the land owner’s manor as “Saint Cloud” after the city in France that held the one of the vacation homes of the French Crown and for whatever reason the name stuck.

Mark you calendar:  September Seventh, Memorial of Saint Cloud, priest and patron of the Diocese.  Celebrate with some French food (do French fries count?  Or, how about French toast?).  In any case, recall that the patron of our Diocese was a member of the royal family of France but gave up riches, power, and fame in favor of humility, service, and the Holy Catholic Faith. 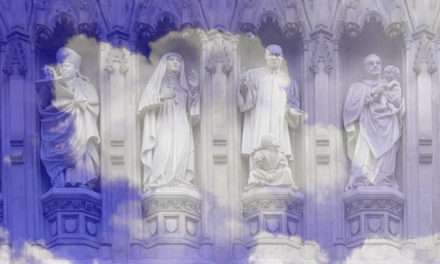 SAINTS AND MARTYRS: TOO MANY TO COUNT

It Was the Best of Times, It Was The Worst of Times

A Tale of Two Hymns