Half of Life is Just Showing Up

HALF OF LIFE IS JUST SHOWING UP

Have you heard that phrase:  half of life is just showing up?  It is certainly an axiom that I held to during my days of high school calculus.  That whole year in math I was never confident that I had any idea at all what was going on or whether my responses were anything close to correct.  Algebra was easy, geometry was fun, statistics was my jam, but calculus was baffling to me.

Similarly, my high school physics class was much more than difficult.  Geology, biology, and even chemistry were fun – even something I looked forward to – yet physics was just not something that came as easily.  I had to remind myself:  keep showing up.  When it was time for my physics or calculus class:  show up.  When the time came to do my homework for calculus or physics:  show up.  Time for a study group:  show up.

In both of those classes I was just never able to put my best foot forward.  I never hit a stride and never felt like I really “got” what was being taught in the class.  This was the very thing that I was telling a great friend of mine who is now a very successful pharmacist.  He certainly excelled in physics, calculus, and many other scientific and mathematics courses.  I was telling him how frustrating both of those classes were for me.  He, then, told me something that very much surprised me.

My friend told me that he was often confused about the teachings of the Church – where they came from, what they meant for him practically, and how he was supposed to make moral decisions using only these guidelines.  He even said:  the Hail Mary prayer, where does that prayer even come from?  Spoiler:  the answer, by the way, is the Gospel according to Saint Luke.

Here’s another axiom for us:  when the going gets tough the tough get going.  It is truly tragic when people stop coming to Mass because they do not understand what is going on or they do not comprehend all the morality of the Christian life.  Lots of people just quit – they just abandon the task entirely, often even saying that it simply does not make sense.

Look at the Holy Faith the same way we look at our education in elementary, middle, and high school or even in our other training as well.  We cannot walk away from math or science just because it is hard (and much less declare that it doesn’t make sense).  We just cannot say that we quit our training in the field because we don’t get it right away.  Please, please see the Holy Faith in the same way:  it is indeed a lot to learn, some aspects are (admittedly) complicated, and yes it might not be the easiest thing to understand.  Keep showing up (that’s Mass), keep doing your homework (prayer). 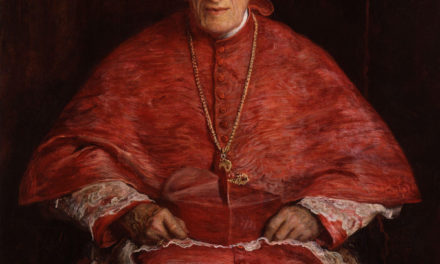 A Convert Becomes A Saint

Serving You in These Days